A Few Words About Us

Over the years it became home to Waring Marker, Tannebaum’s Market, plus others.  In 1969 The Golden Grill was opened and an outdoor patio was added in the 90’s. The building’s history is chronicled by the collection of vintage photographs that decorate the walls. In 1999, extensive renovations were undertaken to preserve the architectural integrity and historic look of the building.  Every effort went into creating hexagonal tile floor, the friendly staff and unique menu. Our goal is to offer a creative selection of food, cocktails, and live entertainment in an enjoyable atmosphere.  Thank you for dining with us!

Located in a historic downtown Saratoga Springs landmark, Bailey’s is a family friendly restaurant with a spacious outdoor patio. Currently operating in his 16th year, Joe Richardson has welcomed two new partners, Sam Bottini and Matthew Beecher who are approaching their 1 year partnership anniversary on May 24th. Just revealed is a fresh, fun summer menu, along with house made mixes for craft cocktails. Bailey’s offers a great selection of live entertainment including open mic night every other Wednesday and a champagne brunch every Sunday starting at 10 am! For the third season in a row, popular local band, Soul Session will be performing live every Thursday from 8-11pm throughout the 2017 track season. As always, Bailey’s patio will have live music seven days a week.

Bailey’s is known for their signature lobster bisque and features many other creatives options such as their array of salads, flatbreads, burgers, paninis, sandwiches, and seasonal entrees. Don’t miss out on the Chipotle Chicken Panini and house made slow cooked Red Reuben! Local ingredients are sourced when available from surrounding farms such as Pleasant Valley Apiary, Pucker’s Gourmet, Battenkill Valley Creamery, and Nettle Meadow.

Boasting beautifully restored original tin ceilings, stained glass windows, and brick walls, this location has been the home to many businesses. Originally the building was a stained glass shop which belonged to G.H. Reeves. In years following, it was known as Tannebaum’s Market, and in 1969 The Golden Grill. The patio was added during the 90s and renovations in 1999 are what started the Bailey’s Saratoga that everyone knows and loves today. 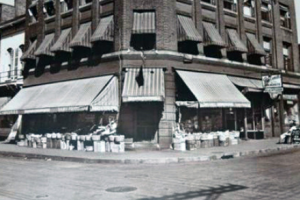 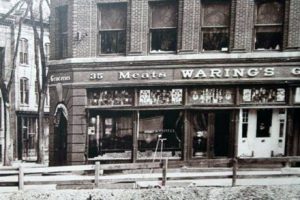